Dragon’s Dogma Dark Arisen was first released exclusively for console in 2012. Recently been released on Steam, January 15th to be exact, developed and published by Capcom, the game features hack and slash elements with an RPG flavoring amongst a vat of open world prowess. The story and narrative were sub-par and mediocre at best, but the many different styles of gameplay offered by the game’s unique class and pawn system painted it as one of the most in-depth RPGs to come out in the current and previous generation. Featuring giant monsters this title was often comparable to another Capcom release, Monster Hunter.

All of the previous DLC for the game has been released and bundled with the PC edition and microtransactions for rift crystals have been removed and can only be acquired through adventuring within the depths of perilous world itself. For those experienced Arisen out there, the Ur-dragon hunt is on, with reset generations, of course.

Upon starting, you play as a courageous hero, venturing into old ruins ultimately learning the basics, fighting off your first creatures, and encountering the dragon. Then the game starts off after apparently many generations have past and you are a lowly village fisherman, forced to take up the mantle of the in-game protagonist known as the Arisen. This task is foist upon you as a giant red dragon of unknown origin sticks a giant claw into your chest and devours your heart, giving you everlasting life. Your quest to track down this dragon will be perilous as you venture through the great lands of Gransys, and meet its many eccentric locals. 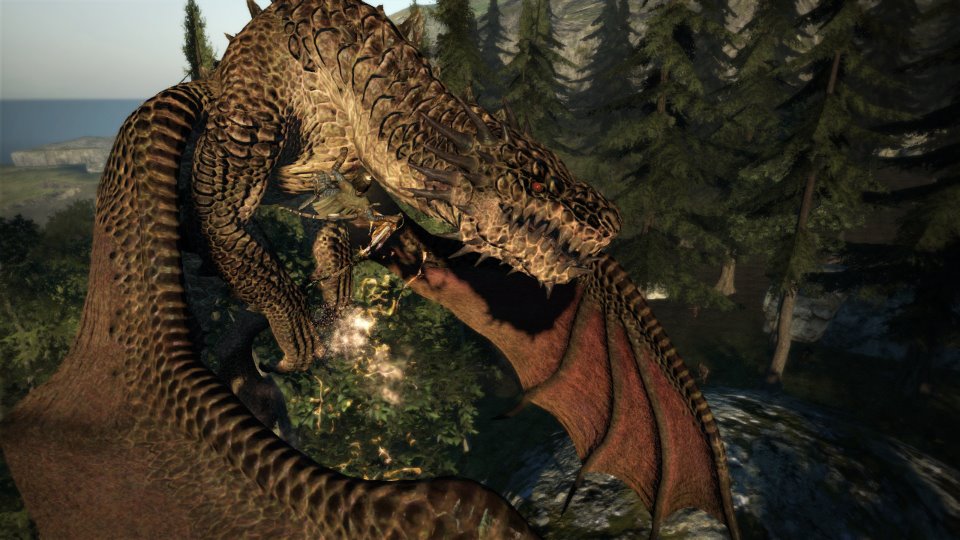 Dragon’s Dogma often shared similarities to Shadow of the Colossus, where you were able to scale up to the higher points of giant creatures to attack their weak points and bring them down faster. The game offers a variety of monsters often pinpointing toward ancient greek mythology, such as cyclops, chimeras, griffins, and dragons. Having played it myself on the console, I made sure to spend meticulous hours on mastering every class in the game, finding myself enthralled with everything the magick archer had to offer, and obliterating these giant monsters with ease.

As I have mentioned before, the Pawn system is probably one of the most unique things about the game. Pawns are essentially companions, you can have one main one, which you of course get to fully customize and level up to your liking, and two side ones, both of which are different people’s main Pawns. I won’t go any further into detail so you can discover it for yourself, if you decide to buy the game. In Dragon’s Dogma you’ll find many familiar mechanics from games such as Dark Souls, Skyrim and as previously mentioned Shadow of the Colossus and Monster Hunter.

Of course, Capcom’s action RPG has its negative sides too. For starters the story is just bland, quests are well, boring and generic for the most part, and you’ll even find it hard to differentiate main quests from side quests at one point. Sadly most if not all of the characters are as boring as the story and if there’s one thing they love to do, it’s stating the obvious. What I mean is that they love to scream out the names of geological locations or enemies. What makes Dragon’s Dogma truly remarkable is the vast open world, although not as populated as I’d like, and the amazing assortment of interesting gameplay mechanics. Combine that with stellar combat and really epic, large scale battles and we have a decent enough compensation for the lack of story. My last complaint is that Capcom definitely didn’t put effort into lip-syncing, I honestly think that if they took the Dark Souls approach and totally avoided mouth movement it would have been better.

Despite all the bad things I said, there is a lot this title offers that others do not. All of its strengths lay in the gameplay, it has amazing combat with a very high level of detail and possibility, whatever your combat preference is, you’ll will find it here. You can be an archer, a melee fighter, a mage or all of them combined. If there is one thing they simply nailed though, it’s the magic, this is by far the most brutal and epic magic I’ve seen in any game, casting large tornadoes or even calling upon meteors to fall on your enemies will most certainly leave you with a sense of awe. The first time I saw what you could do I was like a little kid that just saw his dad dressed-up as Santa for the first time.

It’s really important to know what you want before taking the next step and buying the game. If you are looking for a deep story with rich characters, this is the wrong game for you. However, if you want to experience a brutally detailed action RPG with loads of interesting mechanics and amazing depth to combat, bingo, you’ve found your game.

One thing in particular I enjoyed more than I should have are the occasional glitches when climbing on monsters, they tend to make the experience hilarious and give you and your friends a good laugh. On the annoying side we have some clipping issues every now and then and some occasionally funny or stiff animations. Don’t worry though, you won’t encounter anything game-braking in Dragon’s Dogma Dark Arisen.

Dragon’s Dogma Dark Arisen came with everything that I expected, minus some cut content. More specifically, the Berserk armor sets that were included in the original Dragon’s Dogma release, being cut from the PC version due to licensing issues. Of course, being a PC release, the game had a myriad of new PC settings that greatly improved its visuals.

The settings are everything you might expect of a proper PC game except for a higher level of anti-aliasing, which is stunted to a max of FXAA3HQ. Unfortunately, for those of you who run a 21:9 aspect ratio, this game has only been optimized for 16:9, and UI bugs have been presented as an issue for ultra-wide resolutions. Luckily, Capcom took FOV into consideration for those who like to see more of the world around them. Dragon’s Dogma presents smooth controller to keyboard transitions too, allowing the use of quick decision gameplay for those who prefer a controller for some gameplay portions (i.e. moving around the the open world and melee combat) and prefer your standard keyboard and mouse for others (i.e. ranged combat).

The graphics may not be the best you’ll see, but they definitely look much better and sharper than before, the monsters are very detailed, but the world and character models fall short in some cases. Without being too fancy they manage to capture the atmosphere of the game and you will be enthralled by beautiful vistas every now and then. All of the graphical aspects of the game have been improved for the PC version or at least it looks like it. We can safely say that the overall feeling it leaves is just right, without pretending to be competition for newer games and holding up pretty well considering its age.

Last, but not least, Dragon’s Dogma runs phenomenally well and doesn’t suffer from any major issues besides what I mentioned above. Even weaker systems should be able to handle the game on higher settings without encountering any problems.

The story and character depth fall short, but all of this is compensated by amazing depth of combat. Dragon’s Dogma Dark Arisen has a lot of innovative and non-traditional gameplay mechanics which make it stand out in its own way, the word is very vast, but unfortunately lacks population.

The port itself is absolutely amazing, Capcom did some wonderful work with this one, improving the graphical fidelity of almost everything while making the game run better than ever, even on weaker/older systems.

Overall, I would absolutely advise you to give this game a try, but only if you are well aware you would be playing it because of the gameplay and not the story.